I’ve recently been working on a Christmas present I received from my lovely wife a 15mm 100 figure Space Scum army from Irregular.

They’re a work in progress so far, and I’m only working on an initial force of 25 figures, but here’s where I’m at. 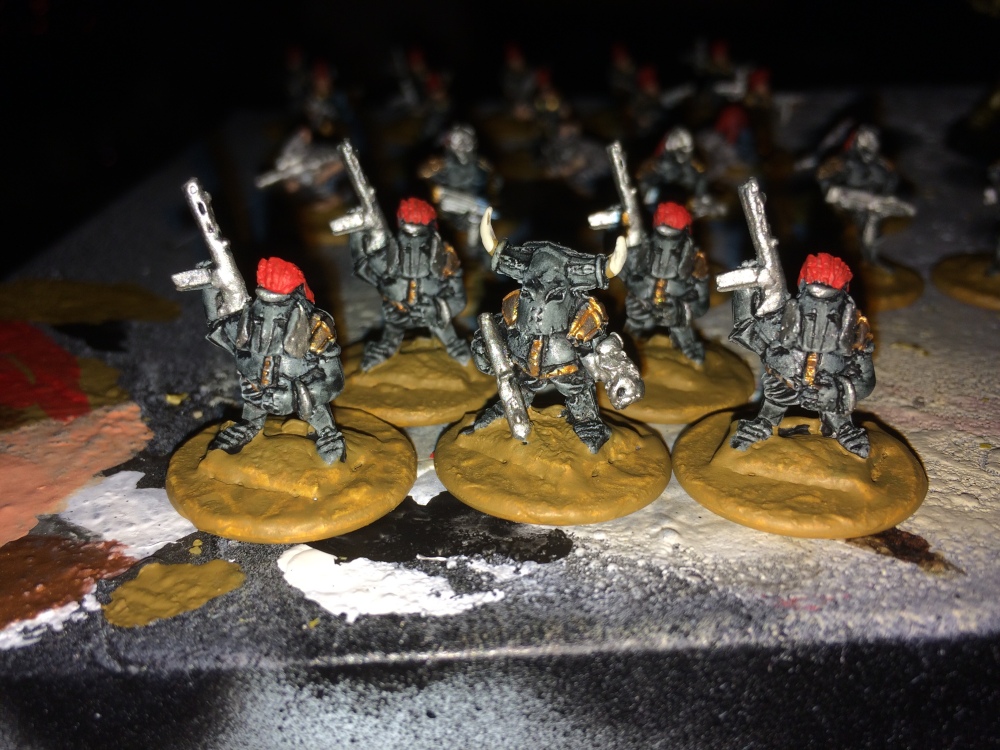 5SF43 ‘Vixen with Blaster’, I’ve only counted two varieties of these, but there may be more as the differences are more subtle. For me they’ll be similar to the Dwarves but they’ll trade in a little toughness for better speed.

Next up is 5SF42 ‘Ratoid with Laser Rifle’, although their ‘Rifles’ certainly look more like Bazookas. Again two varieties here, one with a cowl-ish thing on its head, one without. I can imagine them pulling off deadly ambushes against vehicles. Skulking in the shadows and sewers, lying in wait.

The backbone of any good Space Scum force will be 5SF40 and 41 ‘Space Scum with 2 Hand Blasters’ or ‘with Hand Blaster and Sword’. So far I’ve counted 4 varieties of the duel hand blasters guy and 2 of the hand blaster and sword. Quick, lightly armoured, will die by the bucketload but won’t go down without a fight. Any force that has standard issue Mohawks is not to be taken lightly!

Painting wise I’ve slapped GW’s Black Templar contrast paint over a white primer and then just picked out some details. It’s looking to be a fast and effective scheme since I’ve kept to a limited colour palette.

I’m thinking about putting an order in for a Star Marine pack so I can have a decent opposing force. Rules wise I’m considering resurrecting Deathzap since I haven’t given it much love lately, or I may simply use Featherstone’s Close Little Wars and add a little Sci-Fi flavour. I’ve seen Man Of Tin do something similar before.

View all posts by Wargamingpastor